We’ve finally made it - just one sleep left before the 2021 AFL Grand Final. This week I looked at jumper numbers in Grand Finals.

Jumper numbers were first used on a regular basis during the 1911 finals series. This article explores the history of jumper numbers in greater detail. All this means for the purposes of today’s post is that we are limited to using data from the 1911 Grand Final onwards.

The stats I have looked for this post relate to the totals of jumper numbers worn by teams in Grand Finals, or simply adding up all the numbers worn by individual players.

Here’s some quickfire stats for the highest and lowest jumper number totals in Grand Finals since 1911:

There have only been two Grand Finals in history where the two teams have had the same jumper number total. The first was in 1954 when the Western Bulldogs (Footscray) defeated Melbourne. On this day, both teams jumper numbers added up to 352.

The second time this occurred was just four years later in 1958, when Collingwood defeated Melbourne. This time the jumper number total was 242.

Based on the 22 players named in each of the teams released on Thursday night, the Western Bulldogs will have a higher jumper number total than Melbourne: 456 compared to 386. This will remain the case regardless of what combination of emergencies are selected as the medical substitutes, as shown in the table below. 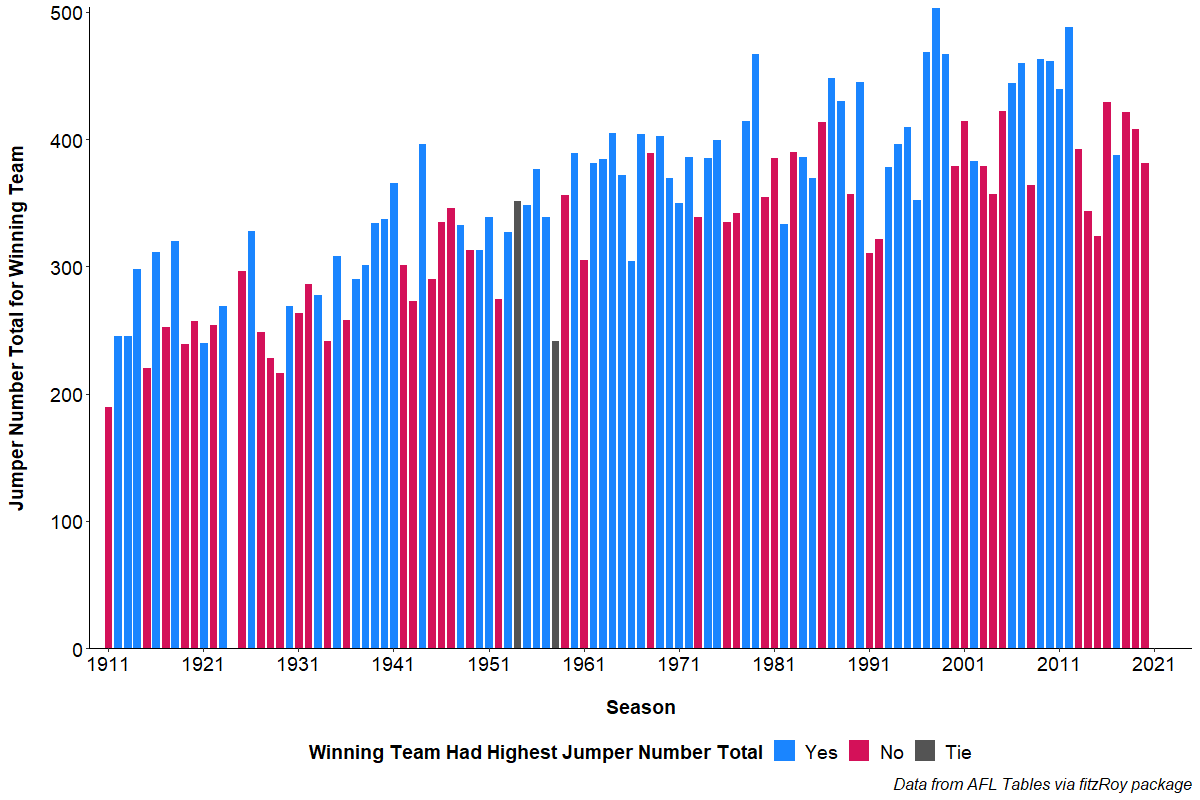 History is also against the Bulldogs regardless of which emergency is named the medical substitute. None of the four possible jumper number totals at the time of writing this post (476, 479, 484, and 499) have previously occurred in a Grand Final.

So, not only have Melbourne’s potential combinations appeared before, the team with this total previously has won four of five Grand Finals.

As a special bonus, here are some quick stats about Ba(i)ley(s).

According to Wikipedia, Bailey is traditionally a male name derived from “bailiff”, meaning “agent of the law” or “debt collector”. The Wikipedia page lists numerous possible spelling derivations for Bailey.

Most football fans will know these players running around tomorrow night — Bailey Dale, Bailey Smith, Bailey Williams, and Bayley Fritsch. The first three play for the Western Bulldogs, while the last Bayley plays for Melbourne.

As far as I can tell, four other Baileys have played AFL: Bailey Banfield, Bailey Rice, Bailey Scott, and a second Bailey Williams who plays for West Coast.

Unsurprisingly, the most Baileys to be fielded by the same team has been done by the Western Bulldogs on 34 different occasions — 22 of which have been this season.

The most Baileys to play in the same game is four, with all four games occurring this season. Melbourne played the Western Bulldogs in two of these games, and the Bulldogs played North Melbourne in the other two.

The 2021 AFL Grand Final will be the first final with four Baileys playing in the same game. Three Baileys have played in the Western Bulldogs’ three finals wins so far this year. Whose Ba(i/y)leys will reign supreme?