One thing I get immense enjoyment from when watching football is seeing a symmetrical statline, such as when a player has two goals from two kicks. I don’t know why I love seeing this—perhaps it’s just my love of efficiency. Consequently, I’ve been curious about how many times a player has finished a game with an equal number of kicks and goals.

The number of goals scored by a player have been recorded (on AFL Tables) since 1897. However, kicks for individual players were first recorded as a statistic in 1965. So, we have a good 50-odd years worth of data to look at for the purposes of this post.

To date, a player has finished with a 1:1 kick-to-goal ratio on 888 occasions. The first such occurrence was four weeks into the 1965 season, when Owen Madigan had one kick for one goal in Richmond’s 24-point win over Essendon. The most recent occurrence was also one kick for one goal, registered by Sam Switkowski in Fremantle’s loss to St Kilda in Round 23 of this year.

Let’s look at a breakdown of these 888 occasions. 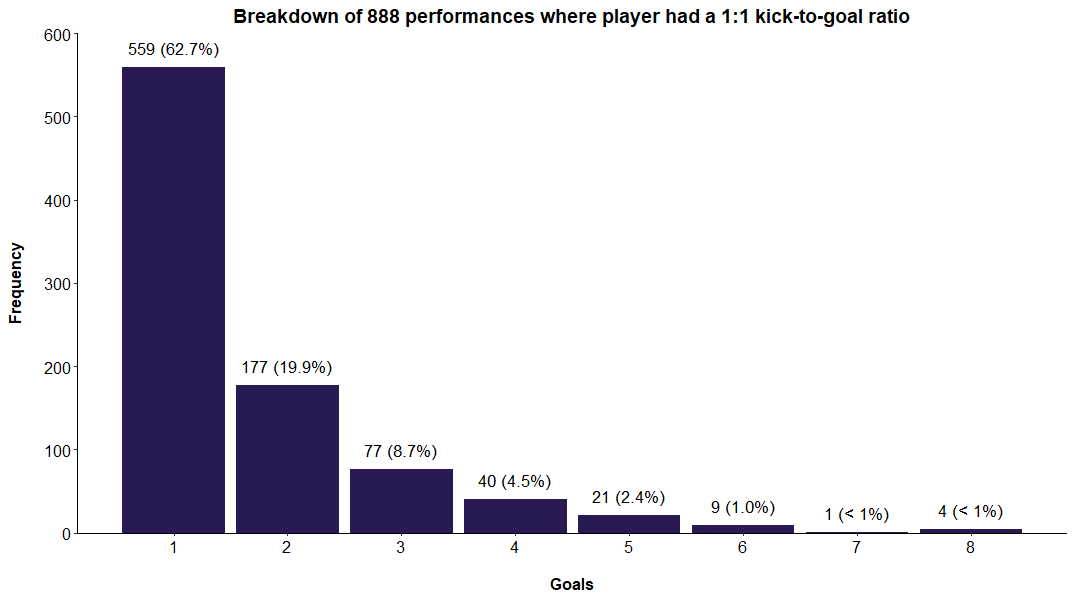 It’s not particularly surprising that the majority of these 1:1 ratio performances were one goal for one kick, before tailing off as the number of goals kicked increased. It makes sense that it would be a lot harder to maintain the 1:1 ratio as you got more of the ball.

But it is interesting that while seven kicks for seven goals has only occurred once—Brendan Fevola (Carlton v Melbourne, Round 5, 2008)—there have been four occasions where a player has had eight kicks for eight goals. These four occasions were:

I think there are several interesting takeaways, just from these four games alone. First, big props to Larry Donohue for having eight goals from eight kicks on two occasions. Second, it’s interesting that two of these four games were also a Geelong player having a very efficient day out against Richmond. Third, Dunstall’s efforts were the only one to not result in a win for his team (Dunstall kicked eight of Hawthorn’s 14 goals as the Hawks lost by 40 points). Fourth, there’s some nice symmetry that the last time someone had eight goals from eight kicks occurred in Round 8, 1998.

These 888 performances were put forward by 638 different players. To date, there have been 151 players who have played multiple games with 1:1 kick-to-goal ratio. I’m going to pick out a few names that caught my eye and discuss these in greater detail, rather than going through the entire list.

There are several ruckmen that also appear towards the pointy end of the list, namely Mark Jamar (eight games) and Aaron Sandilands (five games). Jamar only kicked one goal in all his eight games, while Sandilands kicked two goals on two occasions (the remaining three were one goal games).

Bill Brownless and Jason Dunstall each had four games with a 1:1 kick-to-goal ratio, but so did Setanta O’hAilpin. O’hAilpin is probably better known for his training indiscretions rather than his kicking efficiency.

Although Larry Donohue kicked eight goals from as many kicks on two occasions, these are the only two times he finished a game with a 1:1 kick-to-goal ratio.

And for all his other awards and achievements, Mark Ricciuto only had one game with a 1:1 kick-to-goal ratio (versus Richmond in Round 7, 1995).

But Lincoln, I hear you say, what about handballs? Players can dispose of the ball in other ways beyond just kicking. This is simple to account for—we simply exclude any games where players registered a handball. I’ll leave it up to you to debate whether such performances are efficient or selfish.

There have been 212 occasions where a player has finished the game with a 1:1 kick-to-goal ratio and zero handballs. The first occurrence was again Owen Madigan in 1965, whose solitary disposal resulted in a goal. The most recent occurrence was Toby McLean in Round 17, 2020. McLean kicked a goal in the first minute against the Hawks, but then unfortunately suffered an ACL injury to his right knee minutes later.

A breakdown of these 212 occasions can be seen below: 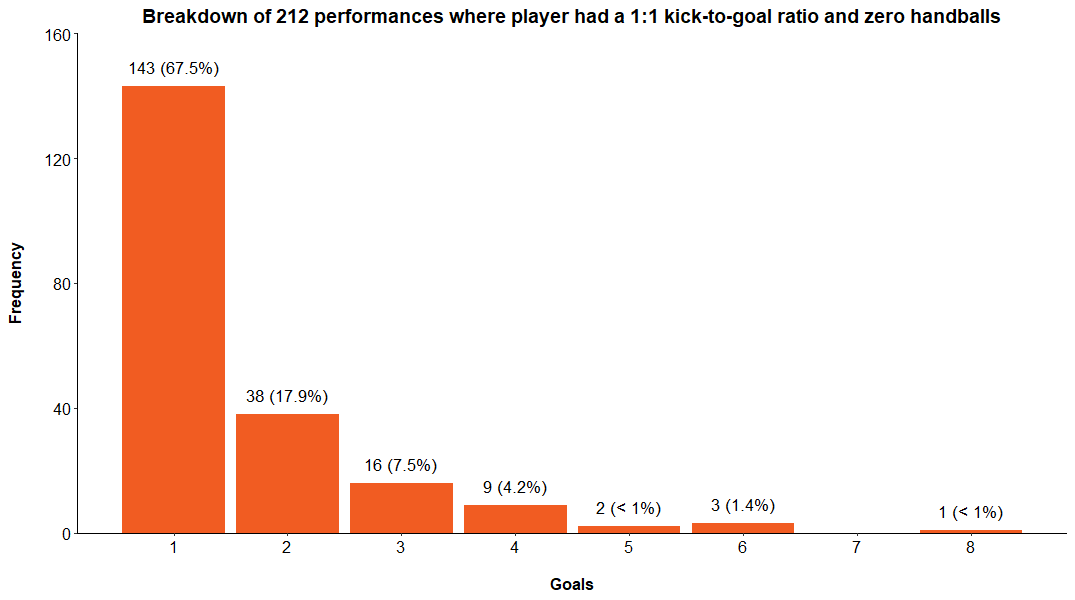 Again, approximately two thirds of such games were games when only one goal was scored. The one game where a player had eight goals from eight kicks with zero handballs belongs to Bill Brownless (the Round 24, 1994 clash versus Richmond mentioned earlier in the post).

To account for ruckmen and their potential to get involved in the game through hitouts, we can also limit our dataset to games where players recorded zero hitouts as well as zero handballs. This means that the only time they come in contact with the ball is when they kick and score a goal. Our dataset is reduced even further as hitouts have only been recorded by Champion Data for the AFL since 1999. Although AFL Tables has data on hitouts prior to this, I’m going to err on the side of caution and be a bit safer here.

Since 1999 there have only been 41 occasions where a player has recorded a 1:1 kick-to-goal ratio, zero handballs, and zero hitouts. As far as I can tell, Scott Cummings is the only player to have two games with this statline (Round 16, 2000 and Round 4, 2001). The record for most goals in a game with this statline belongs to John Butcher, who had six goals from six disposals against the Western Bulldogs in Round 22, 2011. Incredibly, Butcher achieved this feat in just his second game.

And finally, from what I can find there has only been one player who has spent 100% of the game on the ground and still finished with a 1:1 kick-to-goal ratio, zero handballs, and zero hitouts: Mark “Shotgun” Williams (Round 2, 2006, Hawthorn v Collingwood). Apart from his trademark “shotgun” celebration he used after kicking a goal, Williams is known for kicking eight goals against Melbourne in 2005.