Alliteration is the repetition of the same letter or sound at the beginning of successive or closely connected words. The term was first coined back in the 15th century and has been observed in literature, rhyme, and pop culture across many different languages.

Try saying that ten times fast. Alternatively, try saying it faster than YouTuber Xarina, who got through it once in just 6.74 seconds.

Comic books and cartoons often use alliterative names for their characters to make them more interesting and catchy. This helps the viewer, reader, or creator to remember the character. Think about how many characters from the Marvel or DC universes have alliterative names—Bruce Banner, Lex Luthor, Lois Lane, Peter Parker, Reed Richards, Sue Storm—the list goes on. And who could forget Dick Dastardly, Professor Pat Pending, and the rest of the Wacky Races crew?

The AFL is no exception to alliteration. Or should I say aliir-teration?

There has been a lot of talk about Aliir Aliir this year, who has been brilliant for Port Adelaide after being traded from Sydney at the end of the 2020 season. Aliir has slotted seamlessly into the back six for Port Adelaide, winning the Showdown Medal as the best on ground in Showdown 50 in Round 2021.

Aliir is one of many AFL players to have an alliterative name. Che Cockatoo-Collins, Jason Johannisen, Marc Murphy, and Russell Robertson are other examples.

But how many players in AFL history have an alliterative name?

Before we get too far into things, I think it’s important to point out that AFL Tables is a somewhat “inconsistent” with their naming conventions. For example, they list Anthony William (Billy) Brownless as Bill—not Anthony. Therefore, Billy is an alliterative name based on the data I’m using here. Interestingly, they list Harry Himmelberg as Harrison. The latter player is still an alliterative name regardless of which naming convention is used (full name versus nickname), but I felt it was interesting to mention. But I digress.

Aliir has played 87 games, which puts him at equal 118th on the list of games played by a player with an alliterative name. He shares equal 118th spot with George Goninon, who played for Essendon and Geelong between 1948 and 1954. Stephen Silvagni tops the list with 312 games played. Silvagni sits ahead of Mick Martyn, Barry Breen, and Marc Murphy (300 games each) and David Dench (275 games). Among players who are still active in the AFL, Collingwood’s Steele Sidebottom holds the games record (264) ahead of Nic Naitanui (205).

Based on players who are still playing, there are opportunities to fill out the AFL’s alliteration (provided someone is willing to do a Brian Lake and change their name). Potential candidates are Quinton Narkle, Xavier Duursma, Zac Fisher (and any other Zac, Zach, or Zack), Isaac Quaynor, Jamarra Ugle-Hagan, Tristan Xerri, Elliot Yeo, and Cameron Zurhaar.

Of course, player names aren’t the only source of alliteration in the AFL—clubs do it to.

The alliterative aspect comes into play when you consider specific head to head matches. Two examples are battles between traditional rivals Carlton and Collingwood, or the newest expansion clubs Gold Coast and Greater Western Sydney.

For the remainder of the post, I will consider Footscray and the Western Bulldogs as separate teams (The Western Bulldogs were called Footscray until the end of the 1996 season). South Melbourne and Sydney are considered one and the same (as they kept their alliteration status when the club relocated in 1982). Fitzroy will be considered pre-merger with the Brisbane Bears.

Carlton and Collingwood have played the most alliterative AFL games (260), while St Kilda and South Melbourne/Sydney have played the second most (220). At the other end of the list, Fremantle only played Fitzroy four times and Footscray three times before Fitzroy merged with Brisbane and Footscray changed their name. The complete table of alliterative matchups can be seen below.

The results of alliterative matches are presented in the graphs below. Carlton and Collingwood have 128 wins each and four draws. South Melbourne/Sydney and Geelong have good records in alliterative matchups against St Kilda and Gold Coast, respectively. 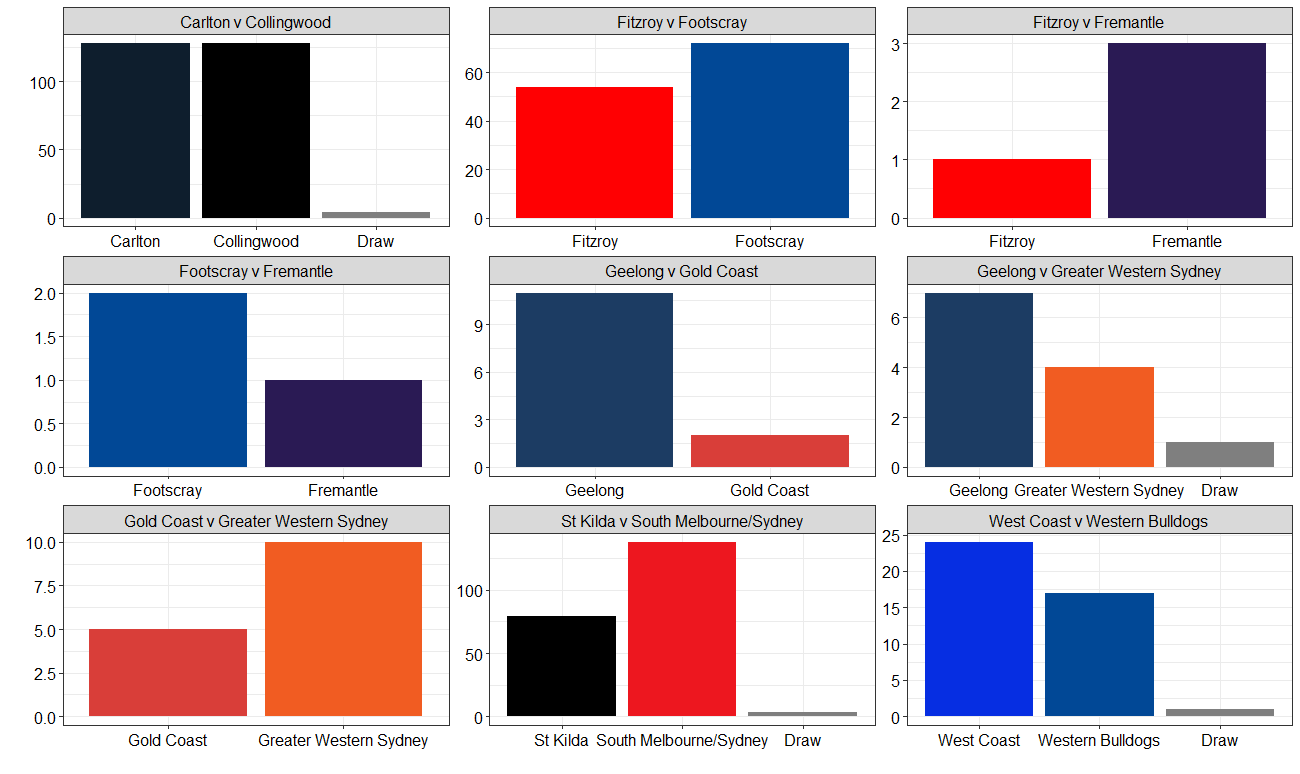 We can combine everything we have covered so far to look at players with alliterative names in specific games, alliterative team matchups or otherwise.

The most players with alliterative names to play for one team in a game is six, which has happened 11 times. Geelong were responsible for seven of the 11 in 1952 and 1953 while Carlton supplied the other four in 1960 and 1961. Interestingly, all Geelong games featured the same six players—Fred Flanagan, George Goninon, Harry Herbert, Peter Pianto, Russell Renfrey, Sid Smith.

In contrast, Carlton had three different combinations of six players (although to be fair, four players played in all four games):

A club has fielded:

The most players with alliterative names to play in a single game is eight, which has happened five times. All games occurred between 1945 and 1961. There have been:

The most players with alliterative names to play for one team in an alliterative team matchup is five. The only time this occurred was when Carlton played Collingwood in Round 17, 1961. The five Carlton players were Barry Bryant, Graham Gilchrist, John James, Sergio Silvagni, and Vasil Varlamos.

In addition to these six games:

Apologies to Swamp, the Useless AFL Stats team, or anyone else who has already done this stat. At the very least I hope I’ve added something new or interesting to previous work in this space.