“Getting Better” was a song released by the Beatles as part of their 1967 album Sgt. Pepper’s Lonely Hearts Club Band. The post-chorus and outro of this Lennon-McCartney number highlights how things are “getting better all the time”.

In a similar sense, football clubs (particularly those undergoing a rebuild) or players (especially young players trying to find their feet at AFL level) often talk about seeing gradual improvements in performance over time: week after week, month after month, year after year.

But how often do players improve their performance over consecutive weeks? For this post, I’ve looked at how many weeks in a row players perform better—that is, record more of a particular statistic.

I’ll be the first to admit that looking solely at raw numbers might not be the best metric. For example, disposal efficiency is arguably more important than the number of disposals you have. But I’m going to put this to the side for the time being.

So, let’s look at the data and see what kind of streaks we can come up with.

First cab of the rank is kicks. Although Daniel Rioli had a somewhat tumultuous year, he finished off the 2021 season strongly after making his way back into the side. This was capped off by a record seven consecutive games where he had more kicks compared to the previous week.

Rioli was the unused medical sub against Adelaide in Round 11 but managed three kicks against Essendon in Round 12, after again starting the game as the medical sub. He collected more kicks in successive weeks, peaking with 14 kicks in Round 21. The graph below displays the streak of games in red. 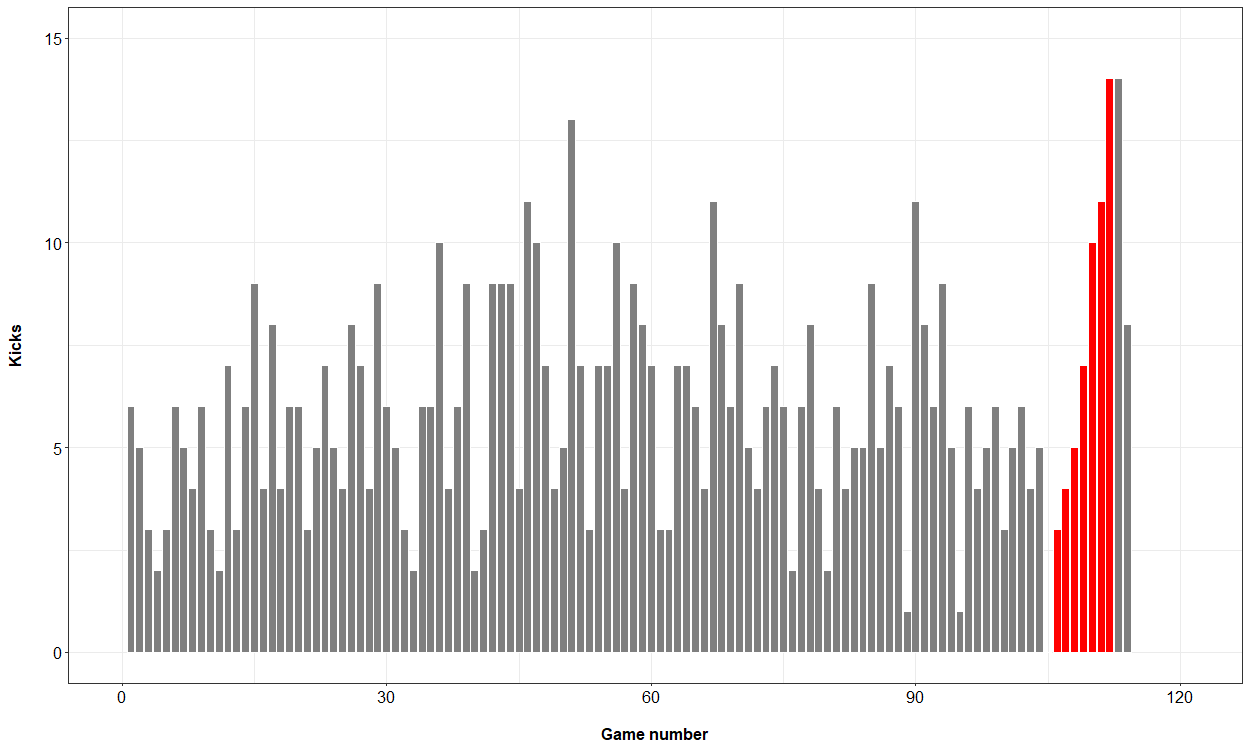 The handball record is shared by five players—Brendon Gale, Shane Woewodin, Darcy Byrne-Jones, Wil Powell, and Ben Keays—who each had six consecutive games with an increasing number of handballs.

One thing that I’ve noticed about these players is the difference at what point in their careers they achieved their streak. Gale (1990-2001) and Woewodin (1997-2005) went almost 200 games before hitting their streaks. In contrast, the three more recent players—Byrne-Jones, Powell, and Keays—all had their streaks closer to the 50-game mark. 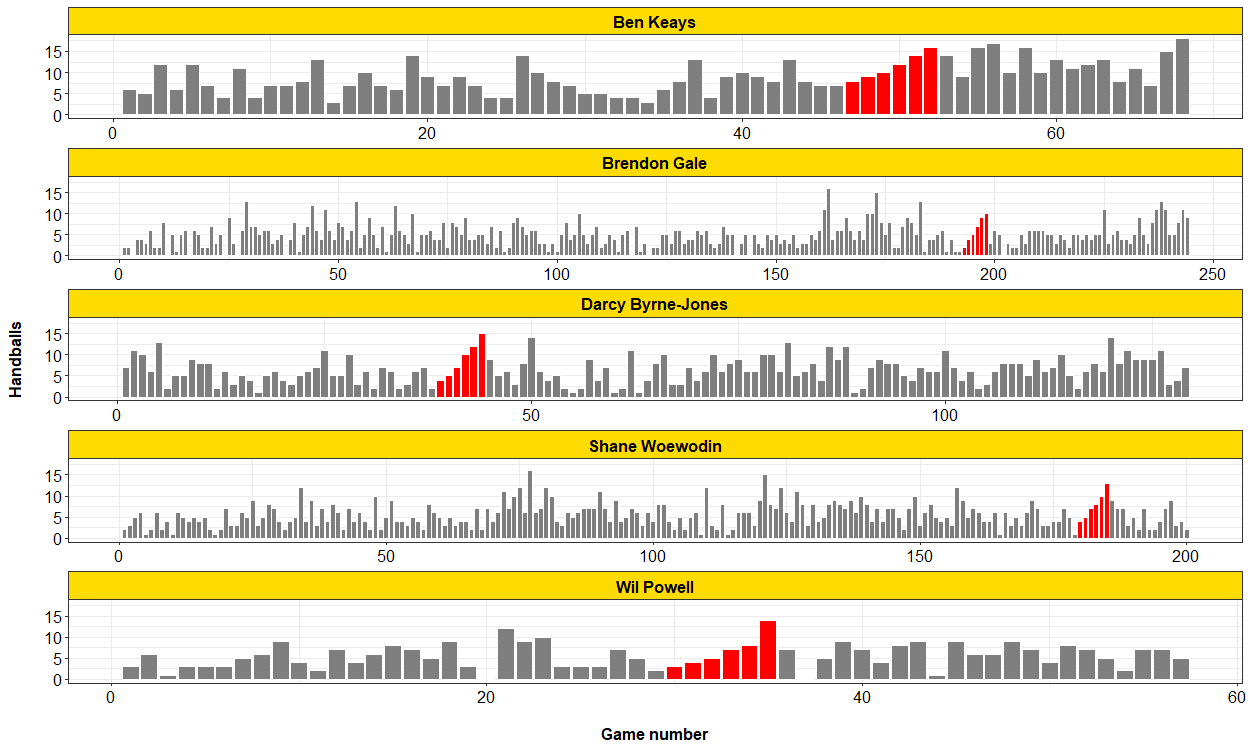 However, when we combine kicks and handballs to look at disposals, two names that I wasn’t immediately familiar with popped up: Matthew Croft and Rod Austin. Croft played 186 games for the Western Bulldogs from 1991 to 2004.

Austin played 220 games for Carlton from 1972 to 1985, winning the premiership in 1979, and was designated as the head coach of the proposed Fitzroy Bulldogs before the 1990 merger was stopped by passionate fans.

Both Croft and Austin had seven consecutive games where they collected an increasing number of disposals each week. 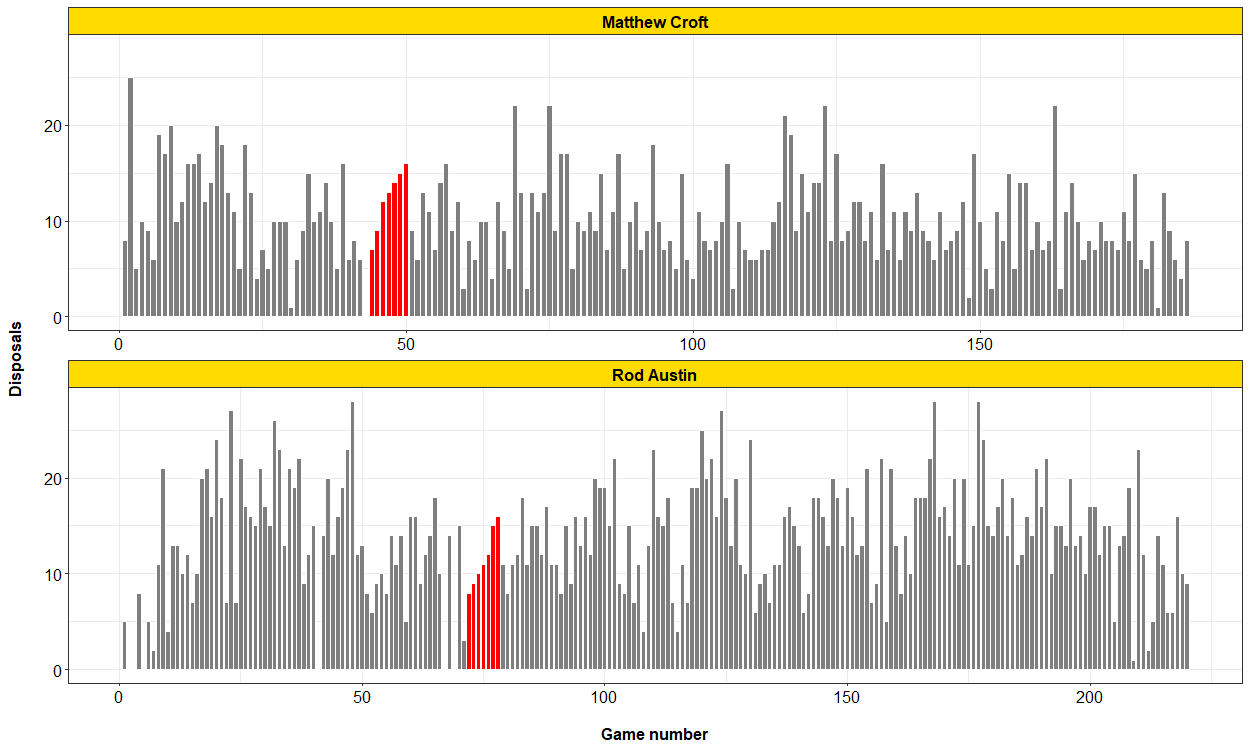 Michael Pickering, who played for Richmond and Melbourne in the 1980’s and 1990’s, started his career strongly. Pickering had a run of seven games (games 7 to 13) where he improved his marking tally week on week. 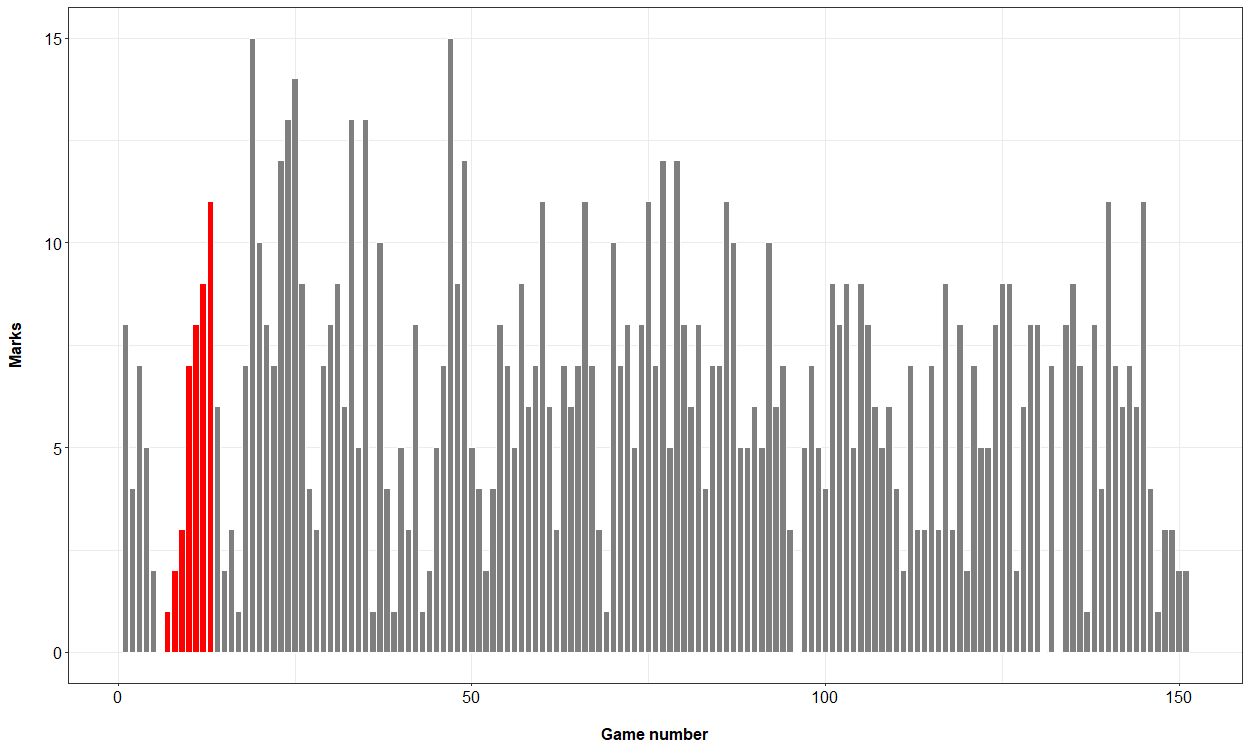 Three players share the record when we consider the number of goals kicked in consecutive weeks: Gordon Coventry, Justin Koschitzke, and Stewart Loewe. Each player had a five game streak. Impressively, Coventry split his over the 1932 and 1933 seasons (kicking six in a losing preliminary final against Carlton, then kicking seven in the first game of the next season). 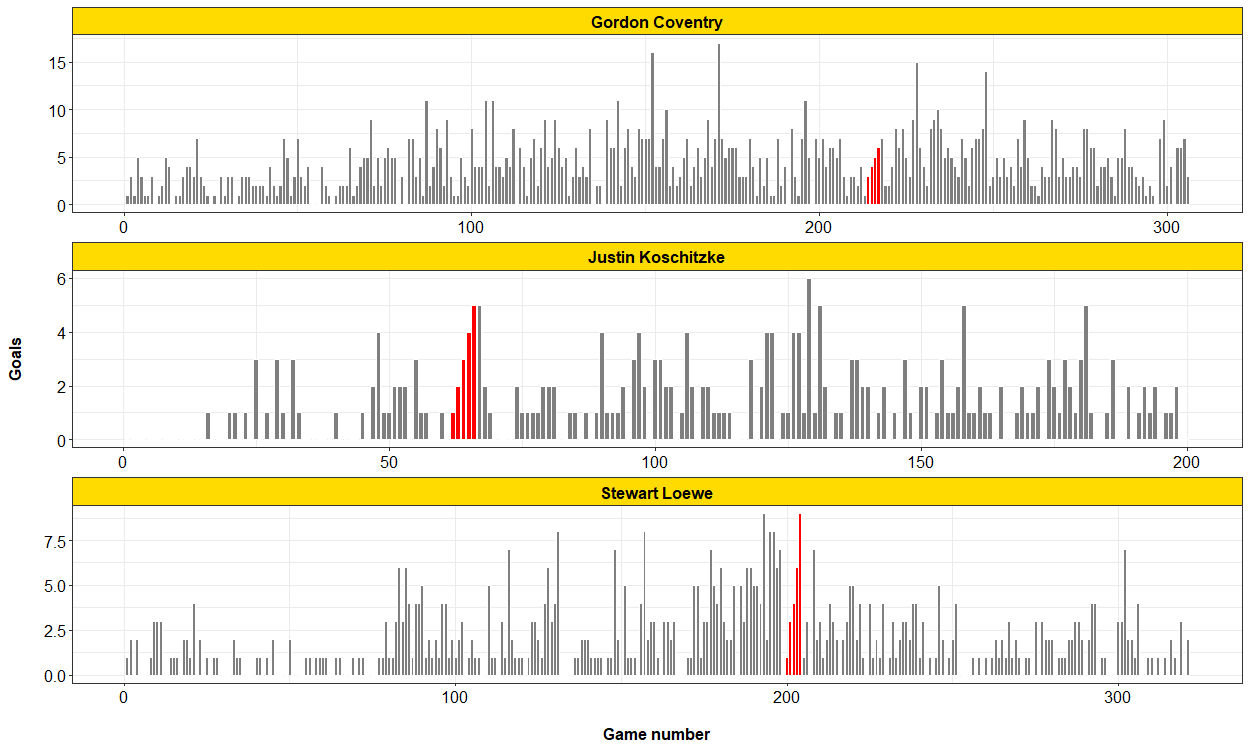 Tom Liberatore, the man with the most interesting tattoos in the AFL, holds the record in terms of tackles. Anyone who has seen Libba (or his father, Tony) play shouldn’t really be too surprised at this stat.

Like Coventry, Libba’s streak was split over two seasons (2016 and 2017). After collecting eight tackles in the Bulldog’s historic premiership win over Sydney, he flew out of the blocks for the 2017 season with 14 tackles against Collingwood in Round 1. What makes Libba’s streak even more impressive is the 16 tackles he amassed the following week (against Sydney) in his 100th game. 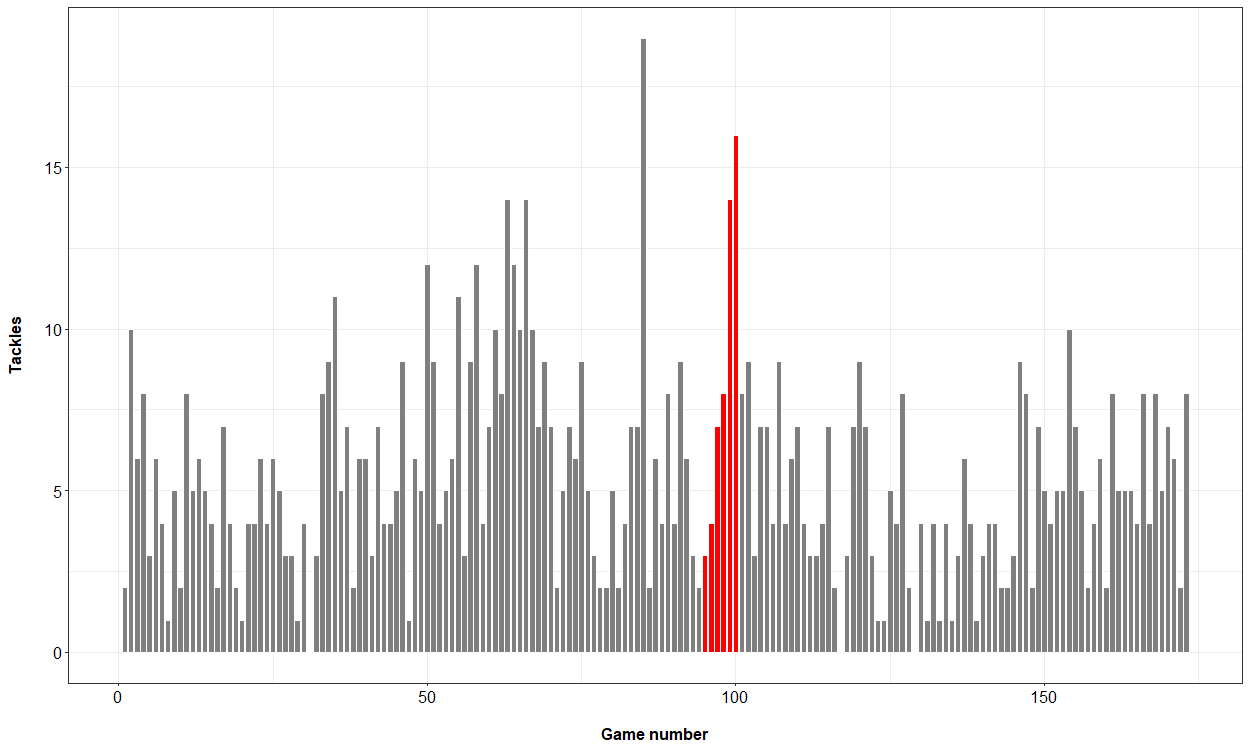 In a nice bit of symmetry, six players had six week runs where they improved their hit out count: Graeme Jenkin, Ron Alexander, Warren Jones, Greg Stafford, Stefan Martin, and Todd Goldstein. Alexander went out on a high, finishing his career and streak in the same game.

Again, the difference career stage of when streaks occur is interesting when you compare Martin and Goldstein, with Martin’s coming much earlier in his career. Both Martin and Goldstein will have the opportunity to break their own records next season—with the two big men being on two- and three-game streaks heading into next season. 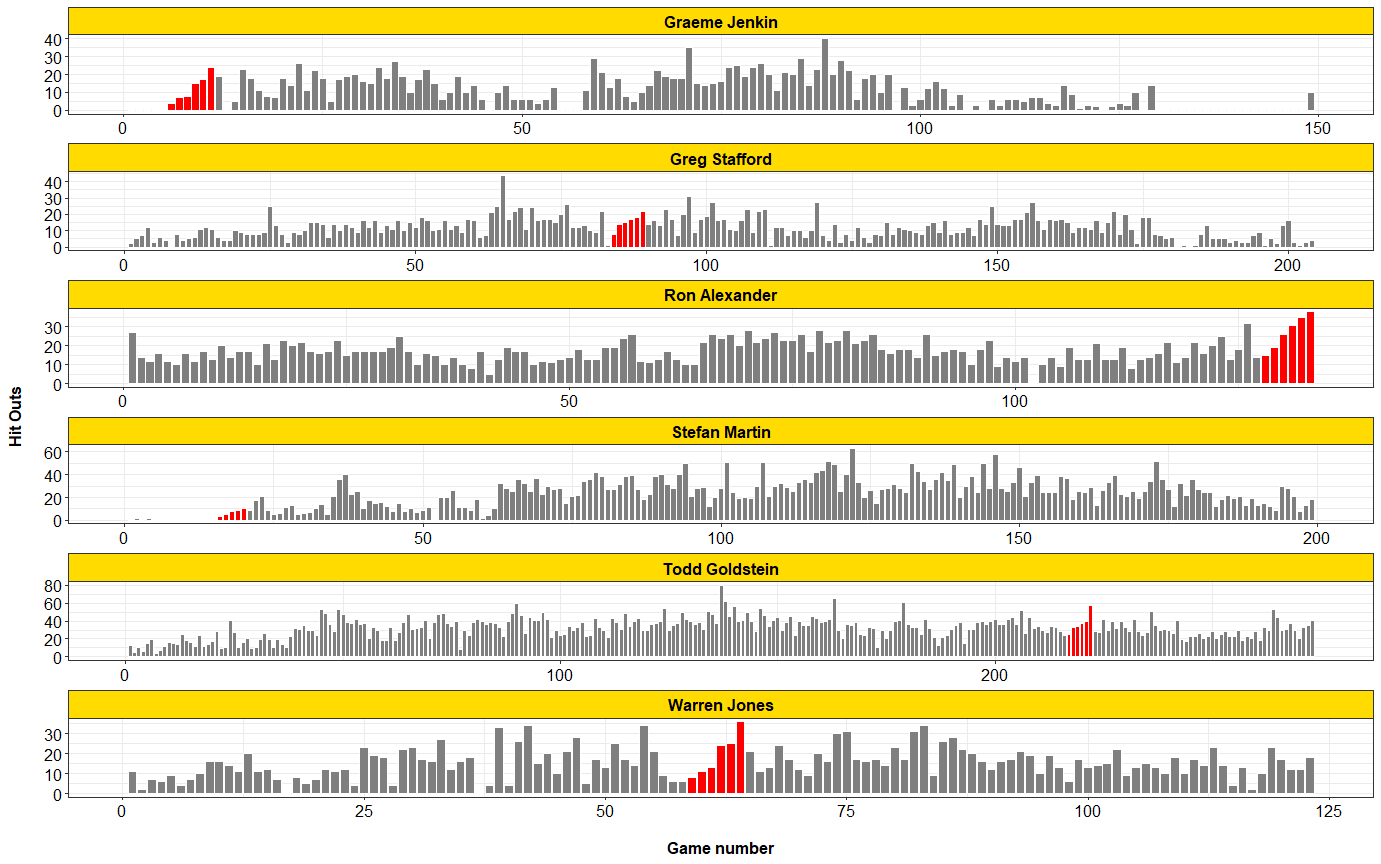 Carlton legend Kade Simpson holds the bounce streak, collecting 22 bounces in increasing numbers over a five week period in 2006. Kind of makes up for his first three games where he went without a touch, doesn’t it?

Finally, the (dis)honour of the most consecutive games with an increasing number of clangers is shared between Ryan Bastinac and Brett Goodes, with five.

Goodes unfortunately didn’t have a great start to his career, with his clanger streak starting in just his second game. It’s probably not much better for Bastinac, who capped off his streak with 10 clangers in his 50th game. 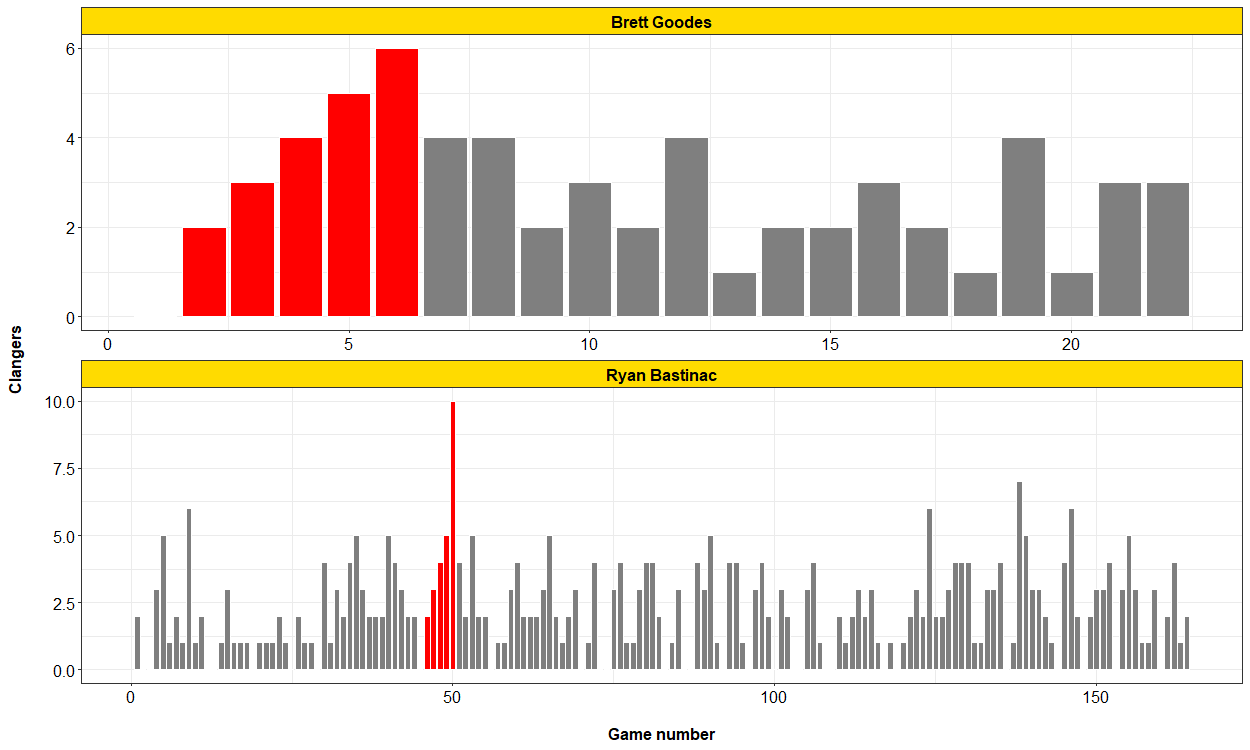