The 2021 AFL National Draft will be held on the November 24 and 25, meaning there is still plenty of time for football fans and the media to pour over delisted free agent signings and mock drafts.

Since the 2010 National Draft, when David Swallow was taken at pick 1 by the Gold Coast, there have been 220 picks in the top 20. The last player picked in the top 20 of a National Draft was Max Holmes, who played 12 games for Geelong in 2021.

But which top 20 pick has been the most successful? Let’s investigate. The graph below shows the number of games played, number of wins played in, and winning percentage for top 20 picks since 2010. 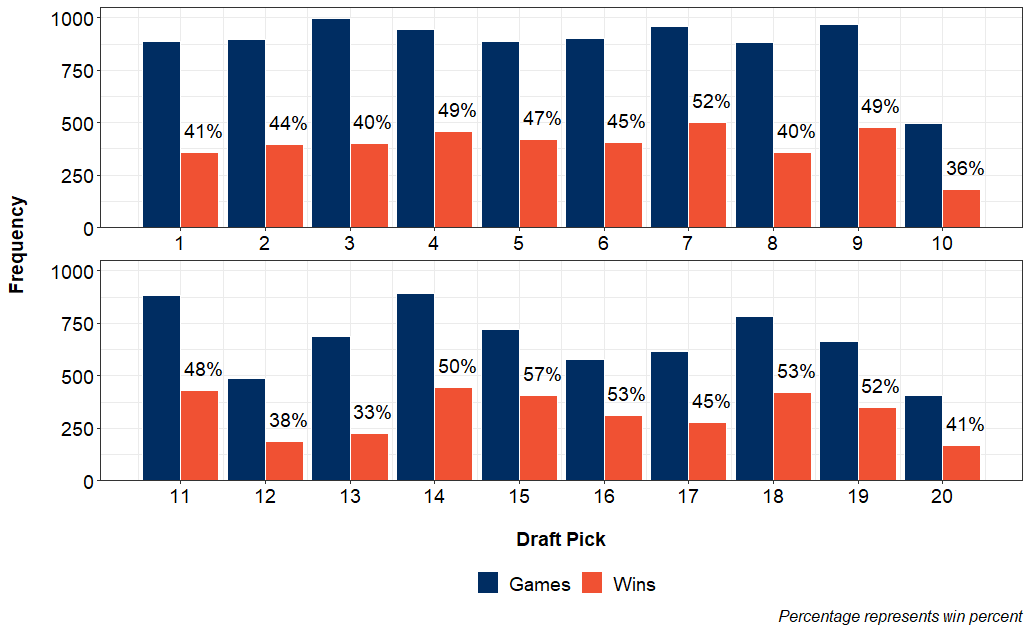 Since 2010, players picked third in the draft have played the most games, playing a combined 999 games. This is more than double that of former #20 picks, who have played a combined 405 games to date.

When we look at the total number of wins by draft position, lucky number 7 comes out on top (503 wins). Again, the former #20 picks brought up the rear, only registering 166 wins.

But when we consider the proportion of games won, things look a little different. Pick #15 has the highest win percentage since 2010, at 56.51%. Conversely, players taken two picks earlier at #13 have the lowest win percentage, winning just 33.04% of their games.

Pick #15 having the highest win percentage (closely followed by #16 and #18) isn’t that surprising, as selection order in the draft is tied to clubs finishing position during that season. This means—before priority, compensation, and academy picks are taken into consideration, or any trading of picks occur—teams with these three picks performed better in that season.

But what I find interesting is the significant difference in win percentage between picks #13 and #15. I would not have thought that there would be such a difference here. But what’s the reason for this difference? Let’s compare the thirteenth and fifteenth picked players and see what we have.

Working our way down the list, it becomes pretty apparent why pick #13s have fared so poorly. Most of the players taken at pick 13 have either (a) been in teams that have been poor since the player was drafted, (b) only played a small number of games, or (c) some combination of the two.

For example, Seb Tape only managed six wins from his 40 games across Gold Coast’s first six seasons. Carlton have been poor for as long as Cripps has been on our list, and Kennedy hasn’t had much more success after crossing from the Giants.

On the #15 side, most of the players have either (a) been in teams that have been successful since the player was drafted, (b) only played a small number of games, or (c) some combination of the two.

To highlight this, Clark racked up 21 wins from 32 games (66%) across three years with Geelong, while Weightman has won 12 of 19 for the Bulldogs (63%). Both teams have played in losing Grand Finals in the last two seasons

Ellis and Rioli won two and three premierships (respectively) in four seasons between 2017 and 2020, meaning they played in many wins during this time. Ellis’ win percentage has taken a bit of a hit since he moved to the Gold Coast, but still comes in at a respectable 57%.

Stone won three of the five games he played in for GWS (60%), but Garlett only tasted victory in 5 of 30 games for the Suns and the Blues.

But even though the reasons for the discrepancy in win percentage between the two picks can be somewhat explained, it still is surprising. I suppose it shows the influence that trading picks and other draft alterations (e.g., matching bids on academy players and priority or compensation picks) can have.

And if you’re wondering, the draft picks with the greatest win percentage by number of games are: